I’ve written before about how much I enjoy riding at Croft State Park.  There is no question that the park has a lot to offer horseback riders, hikers, fishermen and anyone that wants to enjoy the outdoors. 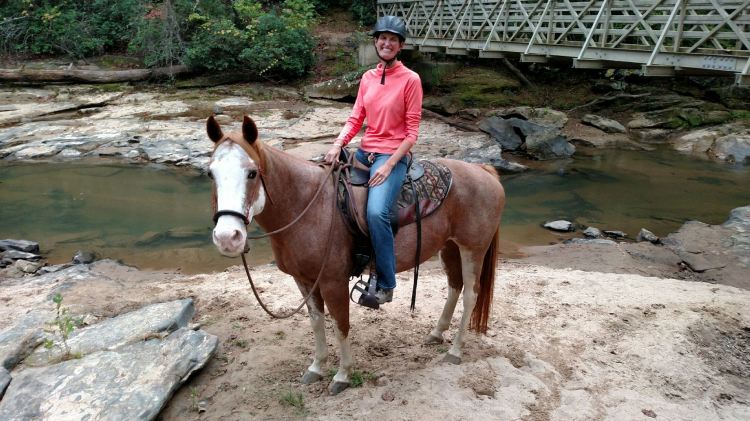 Today when I pulled off the main road into the park gate to meet a couple of friends for a ride, I felt so much more than arriving at a fun place to ride.  I felt nostalgic and  I felt a comfort come over me and it was a little like…coming home.

I’ve been visiting this place for almost 15 years and I’ve seen them make HUGE improvements to the park and the trail system.   I’ve camped there in big and small (as few as two) groups, had girls’ weekends there, get-a-ways with my hubby and camped with our friends and their kids. The bonus of this park is that it not only offers camping but it is convenient enough that I can slip down there for day trips too.

There was the time that we had to leave early when the head of a match got lodged in my eyeball.  I was striking it to burn a tick I had just picked off the dog when a piece came flying off and took up residence, scratching the back of my eyelid  for the next two days.

There was the time that our Shih-tzu, trying to copy his hound brother, jumped into the river and found he had gotten in over his head.  We had save him from his moment of panic.

There was the time I brought Freckles instead of Tucker and discovered what a fun trail horse she truly is.

There was the time that during a canter down the trail, my friend decided to hold his horse back allowing his energy and drive to build.  When he let him loose he went flying by the rest of us.  Tucker wanted to join and at first, I held him back, but then figured…ah what the hell.

There was the time my friend  got bucked off as we were trotting up one the hills.

There was the time another friend rode those trails when she was 6 months pregnant.

My list could go on an on after so many years and so many memories.  It’s funny how a place can weave itself into the fabric of your life without you even realizing that it is happening.  I’m so glad that Croft has!

2 thoughts on “A Place Of My Life”