Last Saturday I was SUPPOSED to ride in our first ever Hunter Pace located at Scotsgrove Stables through the Western Carolina Hunter Pace organization.  Then Mother Nature decided to dump a metric ton of rain on our area and washed everything out so the hunter pace was cancelled…womp womp. 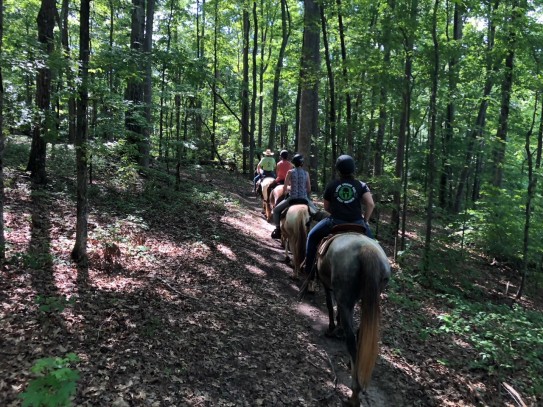 There were four of us camping in the pastures and driveway of our trainer and being the kind of people that make lemonade out of lemons we decided to load up (six of us including trainer and her hubby) and hit the Fant’s Grove trail system that is part of Clemson’s Experimental Forest. 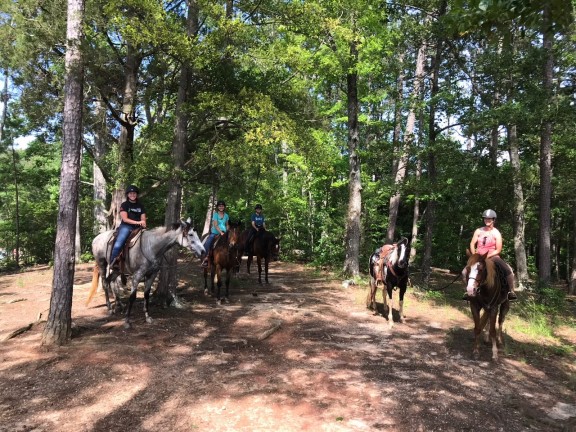 These were new to me trails and I had a lot of fun riding them.  I could not tell you which trail we took and could certainly not repeat the route since I contentedly followed along behind the people that knew where they were going.  I do know we covered between 7-8 miles in about two hours time.  The six of us had not seen each other in awhile so we were completely content to stroll along at a walk chatting and laughing as the scenery rolled by.  There were plenty of pretty views, particularly as we rode the trails that bordered  Lake Hartwell.  The trails were mostly rolling hills that were not overly technical but offered enough roots, bridges, rocks, creeks and obstacles that horses had to think about placing their feet intelligently.  There were a few slick spots and a couple of times that they had to trudge through, but I was pleasantly surprised at how well things had drained in comparison to the amount of muddy conditions I was expecting due to all of the rain.

I definitely see myself getting back down to South Carolina at some point to do a little more exploring on these trails.  Hopefully next time there will not be anchored boats full of partiers for the holiday weekend making it impossible for the horses to get into the lake on the one beach that was along our trip.